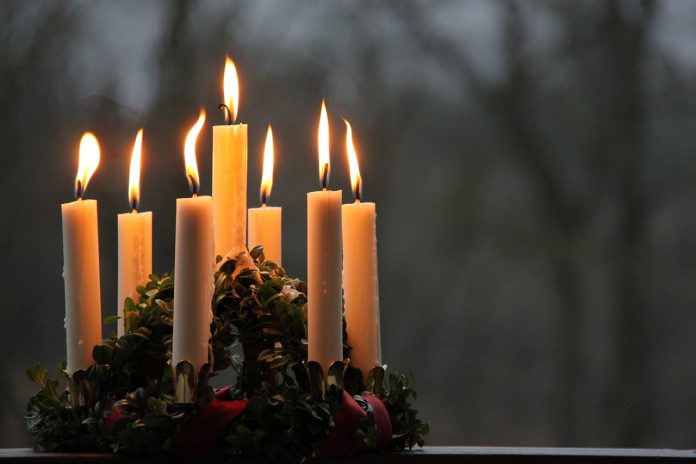 Gathered in a dark room, you’ll suddenly hear singing from afar, “Natten går tunga fjät..” as the room slowly lights up from the candles in Lucia’s light crown and the candles held by her maids. They are all wearing a white gown, with a red satin belt around their waist, closely accompanied by men in white gowns, joining in on the choir, called stjärngossar, star boys.

In Sweden, this is one of the most important holidays during winter, reminding everyone that Christmas is just around the corner.

Schools will generally close around noon on Lucia so that families can prepare for the holiday— but not before having their own celebration, which typically includes Christmas concerts and Lucia trains. In many cities, the local church will also host Lucia trains, open for the public to attend.

Families traditionally observe St. Lucia’s Day in their household by serving coffee, glögg, and baked goods to the rest of the family as well as any guests that stop by. Some of the delicious goods include saffron buns, lussekatter, and gingerbread cookies, pepparkakor.

As we know about the Swedes, celebrating their traditions is very important. They know how to celebrate, but few actually know why they celebrate. So we decided to dig deeper into the Lucia tradition and the history behind it.

One of the earliest Christian martyrs, St. Lucia was killed by the Romans in 304 CE because of her religious beliefs. One of the more well-known stories about St. Lucia is that she would secretly bring food to the persecuted Christians in Rome, who lived in hiding in catacombs under the city. It is said that she would wear candles on her head so that she could keep both of her hands free in order to carry things – such as food. However, it is debated whether the Scandinavian candle crown derives from this or a German tradition where it symbolized a gloria. It is also from the Italian Lucia that the Scandinavian Lucia gets her red satin belt from portraying Saint Lucia’s blood, and therefore representing her sacrifice.

In Sweden, Lucia is portrayed a bit differently than the Saint Lucia of Italy. It is believed that the Scandinavian Lucia instead is a mix of both a Nordic pagan light of god and Saint Lucia.

Dating as far back as the early 1300s, most likely longer than that, the winter solstice has been celebrated in Scandinavia. It was considered the longest night of the year, filled with dangers and the supernatural. Because of this, the medieval Scandinavians decided it would be better to stay up all night. This is what Swedes today call —  Lussevaka — although few would probably stay up all night today.

But one thing that hasn’t changed from the 1300s is the Swede’s affection for light and hope in the darkness. This is exactly what the holiday, and what Lucia, in Sweden stands represents: light, hope, and kindness in the dark and the cold. A beautiful savior in the harsh winter night.

Did you know? St. Lucia’s Day is also celebrated in Denmark, Norway, Finland, Bosnia, and even Croatia.

Do you celebrate Lucia in your household? Let us know in the comments!