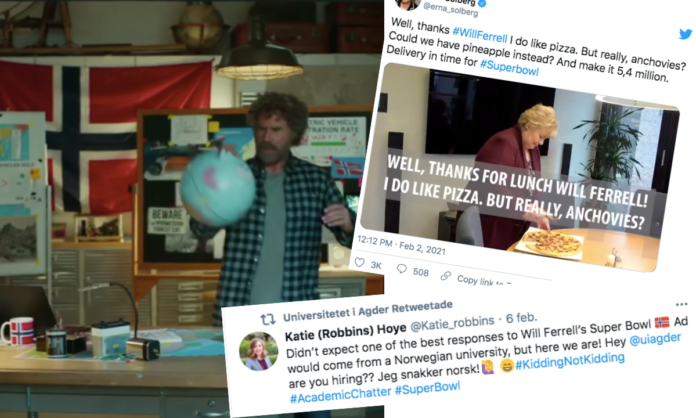 Last week’s Superbowl commercial from GM and Will Ferrell, “No Way Norway”, took a light-hearted shot at Norway for being way ahead of the rest of the world when it comes to buying electric vehicles.

READ: Why Will Ferrel Hates Norway

But Will Ferrell’s prank of sending five million anchovy pizzas, or even his threat of wanting to punch Norway in the face, doesn’t seem to have dampened the Norwegians love for Will Ferrell or the United States.

Unsurprisingly, the EV industry was quick to respond, and the internet was in a matter of hours flooded with replies to Will Ferrell’s challenge, especially from companies in the EV industry.

Not to be outdone, the Norwegians decided to join in on the joke. Prime Minister, Erna Solberg, posted a Twitter reply making it very clear to the world, GM, and Will Ferrell, that she prefers pineapple on her pizza.

But the humorous clap-back didn’t stop there. Perhaps emboldened by being the focus of the most expensive advertising slot on TV, more Norwegians got in on the act:

VisitNorway, the country’s official tourist information bureau, decided to enlist the help of kids to teach him how to find Norway on a map, after he finds himself in Sweden, instead of Norway, at the end of the Superbowl commercial.

The University of Agder got a bit worried: What if he arrived in Norway and found there was more to get angry about than just the number of EV’s on the roads? They decided to take the matter into their own hands by covering up a few other things that Norway does really well.