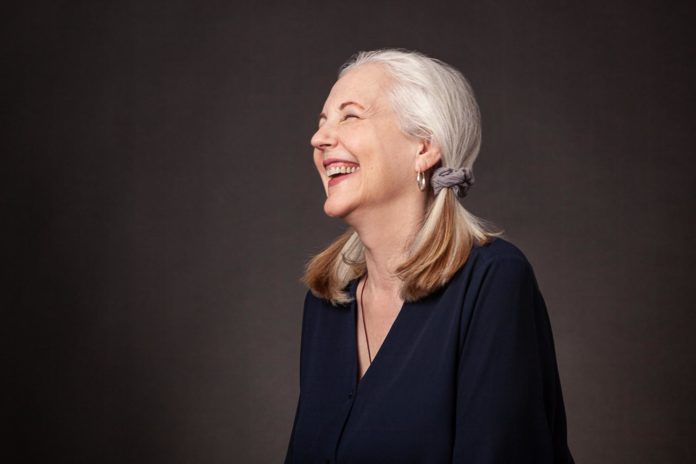 East coast native Florence Wetzel fell head over heels for Sweden and Nordic Noir after being introduced to that world through Stieg Larsson’s books. The journalist and writer was so enamored that she decided to travel to Sweden, immerse herself in the culture, and go on to write multiple books in the genre.

As an American, born in Brooklyn and raised in Westfield, New Jersey, Florence brings a unique perspective to dark Scandinavian crime, a field currently dominated by Scandinavian writers.

Intrigued by her interest in Scandinavia, Nordic Noir, and curious about an American’s perspective on Scandinavian culture, we decided to find out more about Florence.

What inspired you to become an author?

From a young age, I loved to read. I think that all writers start out as readers! I worked on the school newspaper in junior high and high school, then in college I took fiction classes with writer B. J. Chute. She was the first professional writer I had ever met, and she encouraged me to take myself and my writing seriously.

It was during my time at Barnard that I decided to be a writer. I knew that getting published wouldn’t be easy, but I also realized that I wouldn’t be happy if I didn’t have writing at the center of my life.

Have you always had an eye for Scandinavia, and what specifically piqued your interest in the region?

In my twenties, I saw a lot of Ingmar Bergman’s movies, but that wasn’t enough to get me to Sweden. When I read Stieg Larsson’s books in 2010, something clicked for me. I became fascinated with Sweden and Stockholm, as well as the Nordic Noir genre in general. The more books I read and the more films I saw, the more enchanted I became.

The next step was realizing that I wanted to write my own Nordic Noir books. I didn’t know if I could, but I definitely wanted to try. So that’s what I did. It was so much fun plunging into the Scandinavian world, including doing lots of research in Stockholm for The Grand Man and taking a cruise along the coast of Norway for The Woman Who Went Overboard.

Your book The Grand Man is mainly about the Palme murder. With Swedish police recently closing the case, what are your thoughts on their conclusion, and the theory about the suspected murderer?

With all due respect to the Swedish police and the Palme Group, I don’t agree with their conclusion that Stig Engström was the murderer. For many reasons, including the fact that I don’t think that the murder was the spontaneous act of a mentally unbalanced man. All the witnesses say that the murderer was extremely calm, which makes me think that he was a professional assassin. So without giving away my plot, I can say that The Grand Man follows the second line of thinking, namely that the murderer was hired by an organization or even another country.

What were your initial thoughts on Sweden after first arriving there?

My first trip to Sweden was January 2013. It was a very cold winter and it was the first time that I had experienced such long, dark days. The thing that impressed me first was how the Swedes worked with light, whether it was a row of tea candles in 7-Eleven, electric candles on windowsills, or braziers outside restaurants. That was my first experience of Swedish mys or coziness, and it’s something I still appreciate so much.

I also liked the coffee in Sweden, which is much stronger than most American coffee!

Did it live up to your expectations from Stieg Larsson’s books?

Definitely. Stieg Larsson’s love for Stockholm is woven throughout all of his books, and by following in his footsteps I fell in love with Stockholm as well. And I literally did follow his footsteps! I took the Millennium tour that’s run by Stadsmuseet and visited places from his books. I also went back to those places many times on my own to do research for The Grand Man. Even all these years later, I still visit Kaffebar and Mosebacke torg every time I’m back in Stockholm.

I also discovered places that Larsson doesn’t mention, such as the back streets of Gamla Stan, Monica Zetterlund’s park in Vasastan, and the classic café Vete-katten. That sense of discovery has never gone away. I’ve traveled to Stockholm several times a year since 2013, and I discover something new each time. Stockholm is a fascinating city.

Reading your books, it is obvious that you know a lot about Swedish culture. How did you immerse yourself in the culture in order to write the way you do?

Part of my immersion was through exploring Stockholm and other parts of Sweden, but over the years I have learned so much from Swedes themselves, from the friends I made there as well as people I met casually. I also started studying Swedish in January 2014, and that’s when I started reading Swedish books and watching Swedish films and series on SVT Play. But there is always so much more to learn, and that’s what makes my time in Sweden enjoyable as well as challenging.

Are there any bits and pieces of Swedish culture you particularly like? From an American perspective, how does it differ from your own culture?

I am an enormous fan of fika. The coffee and the baked goods, of course, but more the spirit of taking time to slow down and connect with people. The moment you and a friend set your coffee cups down on a table, it’s like a little bubble of peace descends.

Most of my time in the US has been in the New York City area, and things move so fast there. People are extremely busy and it can be hard to find time to meet, or even slow down at all.

I also really love the Swedish book world. I started out reading detective novels, but now I try to read widely, everything from literature to children’s book to horror stories. I also go to Bokmässan (The Book Fair) in Göteborg every year, and I try to go to smaller conferences and events when I can. Even when I am in the US, I can still connect to that world via Instagram and Facebook.

I’ve found the Swedish book community to be tremendously supportive; in fact, most of the reviews of my books have been written by Swedes. And now I write book reviews as well when I can, which is a fun way to be part of that world and give back what’s been given to me.

America is so much bigger than Sweden and as a result it can be hard to connect with people. Sweden is just 10 million people, so it’s much easier for people with common interests to find one another.

What can people learn about Sweden from your books?

I think they can learn practical things, such as interesting places to visit in Stockholm. This includes of course cafes, since my characters seem to spend a lot of time having fika. They can also learn more about the Palme assassination, as well as about Stieg Larsson and his missing fourth book. Also general observations about Swedish habits and customs.

What would be most satisfying to me is if someone read my books and got curious enough to visit Sweden, and then maybe fell in love with the country themselves. That would be a way to pay forward what Stieg Larsson and all the other Swedish detective novelists have given me.

Do Swedes relate to your stories?

Based on the reviews from Swedish bloggers, they enjoy reading about an outsider’s perspective of their country. They also seem to appreciate that I like Sweden so much.

One interesting thing that’s come up several times is my use of Swedish words in my books. I use the words fika, lagom, and mysig, concepts that are difficult or perhaps impossible to translate into English. Some Swedish reviewers got a kick out of seeing these words woven into a story in English, but others found it a bit strange. But as I said, I didn’t see any good way to translate those words, so I decided to just let them be.

MORE INFO ABOUT FLORENCE WETZEL AND HER BOOKS