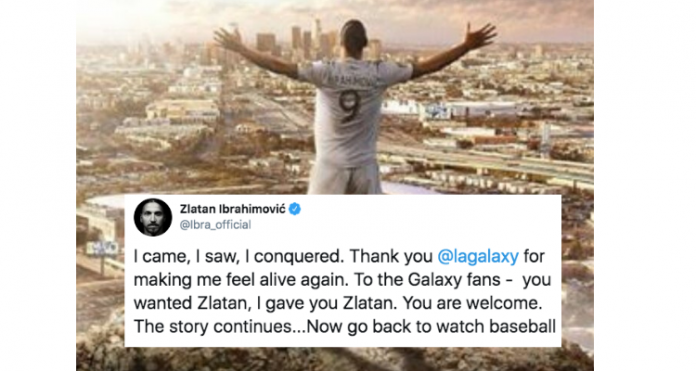 One of the most electrifying stars in Major League Soccer has a big announcement to make:

Ibrahimovic leaves LA Galaxy with 52 goals in 56 appearances and one playoff win in the one and a half years that he was with the club.

In typical Zlatan style, the football star tweeted a photo of him overlooking Los Angeles on November 23:

“I came, I saw, I conquered,” he tweeted, alongside artwork of him overlooking Los Angeles.

“To the Galaxy fans — you wanted Zlatan, I gave you Zlatan. You are welcome. The story continues … Now go back to watch baseball.“

I came, I saw, I conquered. Thank you @lagalaxy for making me feel alive again. To the Galaxy fans – you wanted Zlatan, I gave you Zlatan. You are welcome. The story continues…Now go back to watch baseball pic.twitter.com/kkL6B6dJBr

After the shocking news, fans and fellow football stars sent an outpouring of support. One of the first was LA Galaxy President Chris Klein, who paid in a press statement,

“We would like to thank Zlatan for his contributions to the LA Galaxy and Major League Soccer. Since his arrival in 2018, Zlatan has positively influenced the sport of soccer in Los Angeles.”

Klein continued, “We are grateful for his work ethic and passion. We thank Zlatan for his professionalism and immeasurable impact on the Los Angeles community and the soccer community in North America as a whole.“

This isn’t the first time that Ibrahimovic went out with a bang. After leaving Paris St Germain in 2016, Ibrahimovic posted a message on social media saying he had “come like a king, left like a legend.”

Fans are already hedging bets on Zlatan’s next club, with most thinking he will transfer to either AC Milan, Napoli, or Manchester United.

Where will he go next? Only time will tell — or rather, we think Zlatan will post another message on his social media. What do you think? Let us know in the comments!