Home News The Internet’s Best Reactions To The Midsommar Movie 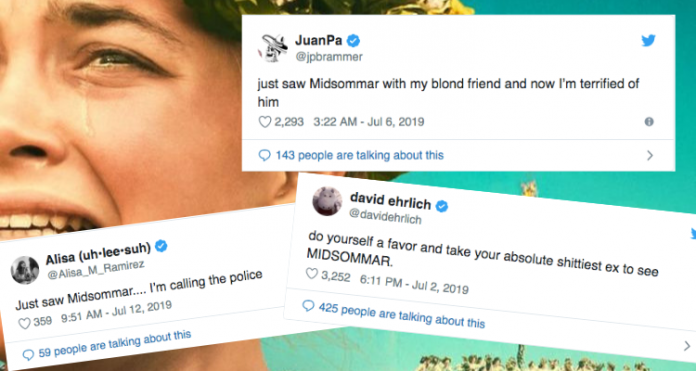 It’s been over a week since the highly anticipated movie, especially by many Swedes, ‘Midsommar’ premiered in cinemas around the world. The film, directed by Ari Aster, centers around one of Sweden’s most important, if not the most important, holiday: Midsummer. The holiday which celebrates summer solstice takes a twisted turn in the movie, as American teenagers travel to Sweden to partake in the celebrations.

Curious as to what people’s opinions were of the film, our editors scoured the internet in search of opinionated film watchers, and we were not disappointed. If you haven’t already seen the movie – perhaps these tweets below can persuade you to grab a ticket today.

Overheard on the way to work:

[goes to sleep with running shoes on]

How excited are you for @MidsommarMovie on a scale of 1 to dressing up your pet lizard and building him a maypole pic.twitter.com/nIKyKkEdGk

My goodness @MidsommarMovie is absolutely incredible. I would wait in line to watch a yogurt commercial if @AriAster was directing it.

Do not. I repeat: DO NOT take mushrooms before watching #MIDSOMMAR You might think its gonna be fun now but I assure you, you will die.

There is a very early scene in Midsommar where Florence Pugh confronts her shitty boyfriend over legit bad behavior, and he gets defensive so she ends up apologizing for making things weird and begging him to just sit and talk to her. I have never felt more seen.

do yourself a favor and take your absolute shittiest ex to see MIDSOMMAR. pic.twitter.com/fs0TuCo1XI

The scariest part of Midsommar is how long all those Swedish people stay locked in a casual embrace. If someone holds you in a hug for that long, you in danger girl.