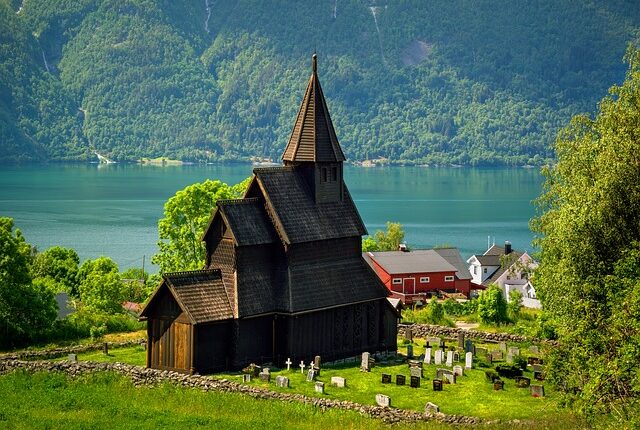 We all know Norway is famous for its breathtaking nature, so how does UNESCO decide on which sites are more noteworthy than others? According to UNESCO, there are 10 requirements, where at least one would have to be met, to make it onto the list of world heritage sites. It is also important that the site is of outstanding universal value, which might be hard to define, but hey, we don’t work for UNESCO, so let’s move on.

It is worth mentioning that there are 5 other sites that are on UNESCO’s tentative list. This means that the sites are, as of now, up for consideration to join the rest of the below sites on the world heritage list.

Bryggen, which translates to the wharf or the bridge from Norwegian, is a cute town that dates back to the early 1400s and played an important role during the Hansa Union at a time when Norway belonged to Sweden. According to UNESCO, the town has been plagued by fires but has been rebuilt using the old, traditional methods originally used when building the town, leaving the structure in its original form.

Located in the Romsdal region and Aurland region, these fjords are about 75 miles apart from each other but have a few things in common which places them on the world heritage list. These two amazing works of nature are considered among the longest and deepest fjords in the world with the rock walls extending close to 4600 ft above sea level and 1640 ft below sea level. Surrounded by waterfalls, glaciers, lakes, forests, and wildlife – the two fjords are well deserving of being featured on the list.

Urnes Stave Church was built during the 1200s and is the ultimate Viking structure with Celtic and Roman influences. There are a few of them across the country but this particular church is situated by Sogn and Fjordane which makes it even more breathtaking.

In the very northern part of Norway, close to the Arctic Circle lies the Alta Fjord. Apart from its exceptional beauty, the fjord is also famous for being the home of thousands of rock carvings, some dating back as far as 4200 B.C. These carvings depict the everyday life of the prehistoric inhabitants of Northern Scandinavia and have been vital in understanding the history of the region.

UNESCO writes about the Struve Geodetic Arc: “The Struve Arc is a chain of survey triangulations stretching from Hammerfest in Norway to the Black Sea, through 10 countries and over 2,820 km. These are points of a survey, carried out between 1816 and 1855 by the astronomer Friedrich Georg Wilhelm Struve, which represented the first accurate measuring of a long segment of a meridian. This helped to establish the exact size and shape of the planet and marked an important step in the development of earth sciences and topographic mapping. It is an extraordinary example of scientific collaboration among scientists from different countries, and of collaboration between monarchs for a scientific cause.”

Any Scandinavian will tell you that one of their favorite places to be during the summer is the Scandinavian archipelago. The wooden houses and fishing huts, boats, and islands are an exotic sight for anyone who has yet to experience it. The archipelago of Vega is no exception. Just south of the Arctic Circle, this small community of a dozen islands houses fishing villages, lighthouses, and farming landscapes. Life here is modest and the archipelago perfectly reflects the way fishermen and farmers alike have been living sustainably for the past 1,500 years.

Røros Mining Town is the home of multiple copper mines that were mined for more than 300 years between the 17th century until 1977. The town was rebuilt from the ground up in 1670 after being attacked and destroyed by Swedish troops. Around 2000 wooden houses with a dark wood exterior can be found in the town.

The latest addition to Norway’s world heritage sites is Rjukan-Notodden Industrial Heritage Site. UNESCO writes: “Located in a dramatic landscape of mountains, waterfalls and river valleys, the site comprises hydroelectric power plants, transmission lines, factories, transport systems and towns. The complex was established by the Norsk-Hydro Company to manufacture artificial fertilizer from nitrogen in the air. It was built to meet the Western world’s growing demand for agricultural production in the early 20th century. The company towns of Rjukan and Notodden show workers’ accommodation and social institutions linked by rail and ferry to ports where the fertilizer was loaded. The Rjukan-Notodden site manifests an exceptional combination of industrial assets and themes associated to the natural landscape. It stands out as an example of a new global industry in the early 20th century.”

Some descriptions are provided by UNESCO under the license CC-BY-SA IGO 3.0.

This article was originally published on May 20, 2021, and has since then been updated.