Home News The Swedish Prime Minister’s Response To Trump Getting Involved In The A$AP... 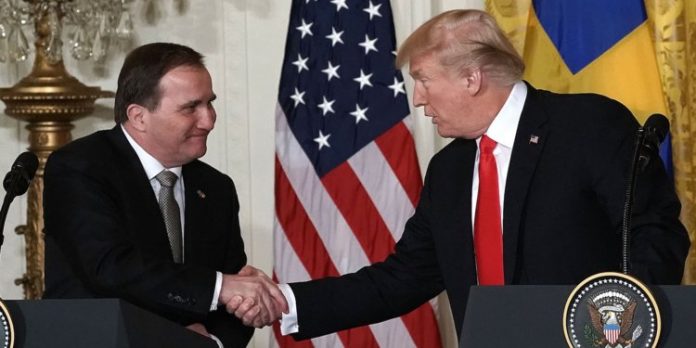 What started as a simple fistfight turned into an international human rights incident, and might be causing a strain on the U.S. – Swedish relations.

American rapper A$AP Rocky, also known as Rakim Mayers, is in hot water with the Swedish judicial system, and now the world is taking sides.

In an incident on July 2 in Stockholm, Rocky posted footage on Instagram of two men following him and his friends around the city despite being told repeatedly to go away. Another video clip shows a scuffle, including a man throwing an object at Rocky’s group. The rapper tells the men, “We don’t want to fight y’all.”

Separate footage from TMZ shows Rocky throwing a man to the ground and beating him with the help of three of his associates.

Shortly after the incident, Rocky and two of his associates were apprehended and put in jail. Stockholm District Court now has until 25 July to decide whether to charge him. Many claim that the prosecutor might be looking at the incident as an attack by A$AP Rocky while others claim it should be viewed as self-defense.

In a turn of events, Donald Trump, the President of the United States of America, is personally seeking the release of A$AP Rocky. Trump called the Swedish Prime Minister, Stefan Löfven, early Saturday morning in order to discuss the rapper’s release.

Trump told reporters that he plans to continue reaching out to “friends of his” in Sweden to lobby for the release of Rocky. Other famous singers, such as Kanye West and Justin Beiber, have also sought to raise awareness about justice for Rocky.

Mr. Trump said he would “personally vouch” for Rocky’s bail if he were released. He said Mr. Löfven had told him Rocky would be “treated fairly.” Hopefully, the Swedish Prime Minister informed the president that there is, in fact, no bail system in Sweden.

“Our teams will be talking further, and we agreed to speak again in the next 48 hours,” Mr. Trump said.

Mr. Löfven, however, emphasized that, “In Sweden, everyone is equal before the law and that the government cannot and will not attempt to influence the legal proceedings.”