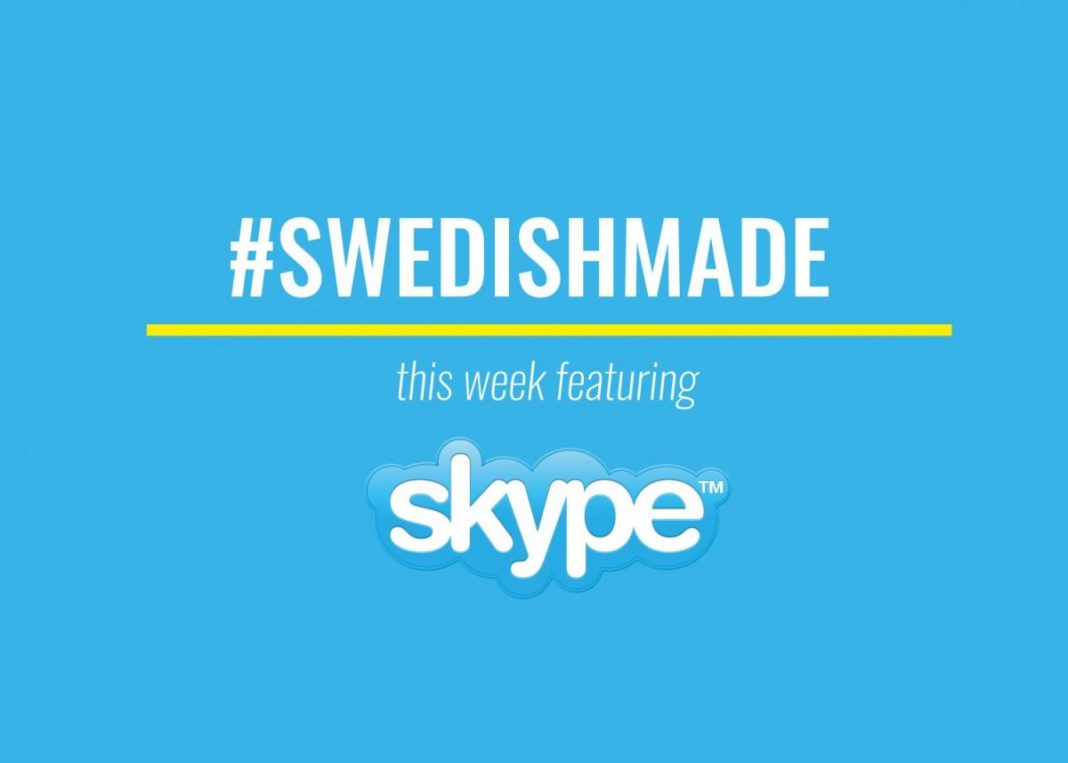 This article was originally published on October 23, 2017.

#Nordicmade is the article series in which we feature famous brands, apps, artists, DJs and companies that are made in the Nordics.

In this article of #Nordicmade we want to introduce …  the Swedish telecommunication software Skype.

Did you know that Skype was created in 2003 by two entrepreneurs: Swedish Niklas Zennström and Danish Janus Friis?

The authors of the Skype software were the Estonians Ahti Heinla, Priit Kasesalu and Jaan Tallinn  – all whom also participated in creating the file-sharing program Kazaa.

Skype was originally meant to be named Skyper, an abbreviation of “Sky peer-to-peer” but because of the number of similar domain names already taken – the group shortened the name to Skype. At the launch event of Skype, Janus Friis said that “We hope that one day, instead of saying ‘I’ll call you’, people will say ‘I’ll Skype you,” He couldn’t have imagined how true his statement would come to be.

What Skype did back in 2003 was something completely new. Being able to call someone through the internet instead of making a phone call? Revolutionary. With the technology and amount of apps and programs we have today, it’s a given that we can communicate with who we want whenever we want. But 15 years ago it was an expensive and tedious affair to get in touch with anyone outside of country borders.

The Skype-hype was massive. Headlines worldwide reading “Skype – don’t type” at the same pace as internet users were getting used to calling all over the world without paying a dime. Only two years after the launch in August 2003 Skype had 74.5 million registered users in 225 countries. This was around the time Niklas Zennerström and Janus Friis started negotiating with eBay about acquiring Skype and the expectations were once again sky-high.

September 21th, 2005: Skype was sold to eBay for 2,5 billion dollars (20 billion Swedish kronor) and according to Expressen.se, the amount was so large that Bank of America didn’t even have enough money to make the transaction. Zennerström and Friis were multibillionaires over a night. Though unfortunately for eBay, the sell ended up being one of, if not the worst, deals in the history of the IT-world. eBay never managed to integrate Skype and its services in their business model. In October 2007 The New York Times wrote “Here’s a suggestion to every Internet executive: take a Post-It note, write “Ebay wasted $3 billion on Skype” and stick it to your monitor. Stare at it the next time some hot social whatever-2.0 company comes by and talks about growing fast and finding a revenue model later”.

In 2009 Ebay sold 65 percent of Skype for 1,9 billion dollars (13,5 billion Swedish kronor). But this was not going to be the last time that Skype exchanged hands. The buyers were Zennerström, Friis and a group of other financiers. Part of the reason why they manage to get the deal done was that during the negotiations it became apparent that eBay hadn’t bought the source code to Skype, meaning that it still belonged to the founding duo, thus Ebay only owned a license. By threatening to destroy the license agreement, other interested companies were scared off since none of them were interested in buying Skype without the software.

Zennerström said in an interview with TechCity Insider that “our objective was to build a longterm company that could be a standalone company. We had no plans of selling the company. But it became very strategic for several of the large US internet players so we got very good offers and we had to switch from our company building-hat to our shareholder hat. We decided that it was a really good opportunity to sell the company,” Niklas Zennerström also said that he had already made the transition from entrepreneur to investor which made the sale a lot less emotional.

However, or not the sale of Skype might have been the biggest heartbreak of Zennerström’s life, it sure must have been worth it. On May 9th, 2011, it was announced that Microsoft had bought Skype for 8.5 billion dollars and the world was once again blown away by this groundbreaking company. Many pointed to Zennerström’s amazing negotiations skills as part of the reason for Skype’s heavy price tag. Zennerström himself told TechCity Insider four years ago that his single biggest lesson in life has been that “You can shoot for the stars and you can change the world, and you shouldn’t think that it’s impossible. It. is. possible,”.

2. A marriage was once consummated on Skype. Samuel Kim and Helen Oh got married on Skype because at the day of the wedding, the groom ended up in the hospital and couldn’t make it to the Church. The groom wanted to postpone the wedding but his fiancée wouldn’t have any of it and in the end they couple married via Skype and the video conference included over 500 people.

3. In 2016, the recorded number of call minutes made through Skype was at more than two trillion minutes.

4. Every single day that goes by, it’s estimated that Skype is responsible for a 100 000 000 dollar loss for mobile operators all over the world, thanks to people being to make free calls over the internet via Skype instead.

5. Skype is particularly useful for meetings, remote education and personal communication purposes, and in 2015 it was able to used in a total of 38 languages.

6. Skype has 100 million registered users in China – this is as many as the total amount of users with Android devices.