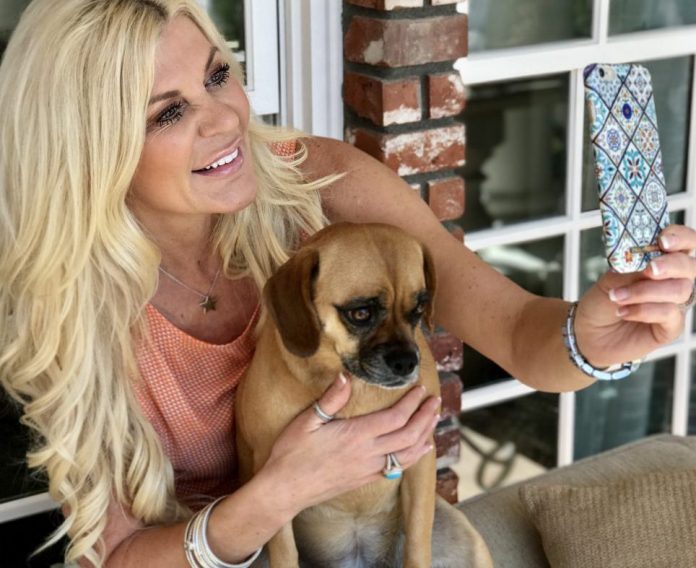 Swedes in the States had the honour of interviewing Maria Montazami, the most beloved Swedish Hollywood Wife from one of Sweden’s most popular shows. This is what she had to say about moving to the US, getting settled here and Donald Trump.

You’ve been a part of the cast on the show Swedish Hollywood Wives for 8 years now. What are your best and worst memories from the show?

Very hard. It’s a hard question since Swedish Hollywood Wives is such an easygoing, enlightening and fun show to record. The show has helped me get to know myself better and accept myself just the way I am. Sometimes I can be a bit wimpy and I speak slowly, but that is just who I am and that’s okay. There has mostly just been good things coming out of the show, things that I could never do otherwise, like my wine collection, Montazami brand and the perfume, and so much more! If you look at all of this, it’s all thanks to Swedish Hollywood Wives. So, I really have to say that it has been 99% positive. Of course, sometimes there can be a minor fight or argument at a brunch, but looking at the big picture it becomes irrelevant. Everything that has happened was thanks to the show.

You have, during these years, become one of Sweden’s most loved Hollywood Wives. How has going back to Sweden changed since you started recording the show?

When you go back to Sweden and tell your American friends that ‘it’s a little bit like being Justin Bieber when you are there’, they just laugh at me. But to come back home to Sweden, take pictures and go about different projects and errands is just so much fun. It can be a little bit stressful sometimes with all the selfies, but that’s how it is nowadays and it goes on for hours. But I have nothing against taking pictures with my fans.

Do you ever hang out with any of the other Hollywood Wives outside of the show?

No, I don’t. I live in South Orange County, close to Laguna Beach, and they live in Los Angeles which is about a 90 minute ride from here. To hang out with any of them frequently for just a fika or a lunch would be a whole day thing. We are all in the same show, we are friends when we are recording the show, but we are not really hanging out together.

What does your family think about being on the show?

My family is pretty easygoing. “Oh yes, a new season is starting. This time I’m going to be super cool” we all say, and then it just kind of turns out the way it does anyways. We are just such a relaxed family, and we are always up to something. So, it all just becomes very natural without us having to stage things to make it exciting. And we all think recording the show is really fun!

What else do you have going on apart from Swedish Hollywood Wives?

I run Montazami brand together with my daughter Sara and Hanna. In November, we launched a perfume called ‘White Label’, which is fantastic. It will be sold all around Sweden and in departmental stores like Åhlens and Kicks. Right now we are working on a body lotion, a shower gel and Christmas boxes. We also do pop-up shops when we come to Sweden. There’s always a lot of work to do, but it is so much fun. And I’m excited to see where it all takes us.

You also have a wine collection. Tell us more about that?

Yes. I have a wonderful wine collection, that is sold in Sweden. It’s now being sold at Systembolaget – the California Chardonnay and the Red Zinfandel. And the Spumante that everyone just loves! So much fun. I love to be in the wine business and it has been going very well. The wine cannot be bought in the States, unfortunately.

Tell us about how you came about to move to the US?

While the kids were growing up I was pretty active in SWEA, you know, to keep the Swedish culture and tradition going. I might have made a bit of a mistake to always boast about how Sweden is better. Even the children’s projects for school have always been about Sweden whenever opportunity has been given to choose a theme for them, even though we are all Americans and we are so happy and thankful to live in this country, especially where it is so warm.

What were your first thoughts on LA?

There were a lot of things that were so different. The food stores were huge and this was 30 years ago. Just going to buy cereals was crazy ’cause there were  so many brands and types to choose from.  And then the cars, they were so big and shiny.

We are very hard working people. So, we have been able to live a good life. Hard work in the US really opens up for a good life. But you have to work hard for it.

The hardest part was in the beginning, when I was 22 years old and I was so Swedish. It was so important to me to learn how to decorate and design the interiors which was hard to adjust to.

The hardest was having children and them going to school. There was a lot of politicking going on in school. The parents would often bring coffee to the teacher so as to butter them up. And it was a lot of pressure trying to get the right teachers for the kids. You always want what’s the best for them. I cared so much about what the other parents were thinking about me. Today, I really wish that someone would have told me not to care as much. I am going to tell my children, that ’oh my god, don’t stress!’. The small things like your young children having to have the best teachers and so on and on are not important. It gave me so much stress and that is something I don’t want them to feel. Now, my kids are obviously so American. Maybe it will be different for them when they have children but I was Swedish and it is so different from how it is in Sweden. It really is a sort of group pressure here. Very competitive.

What are your tips to any Swede who wants to move here or Swedes who want to start a company here?

Follow your vision, and do thorough research. And always remember that its going to go up and down. Make sure you have a great support system. And of course, having some money to invest in the beginning is a good idea.

I’m from Skåne, so I have to say Helsingborg, Sofiero travelling over to Denmark. Falsterbo. I think all of Sweden is much of a smultronställe all in all. But the winters aren’t so charming.

Not sure. I’ve lived here so long that I can’t really remember if there ever was anything. Usually, a culture clash would appear when you are from an entirely different culture. My husband is originally from Iran, but he is so Americanised. He moved to London when he was 13. But as a Swede, you can really slide in to the culture here without bigger problems. So in my case, there hasn’t really been anything extraordinarily different.

A good thing is also that I and my husband are so similar when it comes to raising our children. I have really been lucky in that way.

What are your thoughts on the new President of the US?

It’s crazy. I don’t want to say “let’s hope for the best” since that sounds a bit lame but then again, he is a businessman. He definitely has a different type of thinking. I do, after all, believe that he wants what’s right for the country. He want’s to fight ISIS and he wants to somehow lower the poverty levels in the country. If you look at downtown LA, for example, you can see that it really does need help. All the things that we Americans are scared of, he wants to deal with.

But then again, he says these stupid things, and his twitter is just so immature. He doesn’t have a very thick skin, and adds and subtracts numbers from statistics sometimes. I guess we just have to take these 4 years as they are and wait for a new election.

An old classic is The Ivy, in Hollywood. A perfect place to have lunch. But other than that, I don’t really hang around too much in LA.

Around where I live, there are beautiful places to see like Laguna Beach. A lot of tourists go there. I hear that it’s a favourite when I meet Swedes that are here visiting for a meet and greet with me.

How do one get a meet and greet with you?

I love to meet all the Swedes that come visit me here. We usually go for a coffee and sit and talk. Some of them bring candy and ostbågar from Sweden to me. It’s so lovely! My assistant Anna schedules all my meet and greets, so they would have to email her.