Home Design IKEA Wants To Show You How Our Homes Will Look Like In... 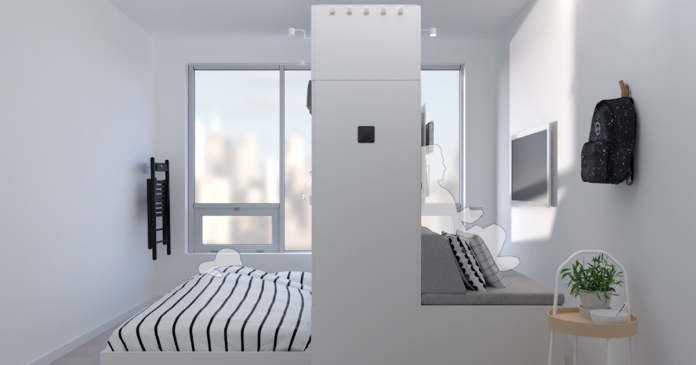 In recent years, people have taken a natural interest in the future, especially with changes in the climate, expanding cities, and new technology coming out every day. What will the future look like? Will there be robots? Will our apartments clean themselves? If these questions tickle your interest, then look no further than IKEA’s newest project!

IKEA, along with developer Ikano Bostad and design lab Space10, showcased its idea during the Democratic Design Days this past Tuesday in Älmhult, Sweden. The town in which IKEA’s founder, Ingvar Kamprad, came from.

“We’re going to have to share much more in the future,” Evamaria Ronnegard, development leader at IKEA, said in an interview. She’s hinting at the recent estimates that 70% of the world’s population will want to live in cities by 2050.

“In some cultures, people are very open to sharing and live in large family constellations whereas we, here in Sweden, are used to having our own private sphere,” Ronnegard said.

The Democratic Design Days were chock-full of amazing ideas this year. Here are just a few that we think will change the future:

IKEA is collaborating with Ori, an MIT-based startup, to present Rognan, a robotic furniture solution. With a few light touches, you’ll be able to transform a small living space into the ideal configuration you need, such as turning a table into a cupboard.

The first launch of Rognan furniture will be in Hong Kong and Japan in 2020, two places known for their population density and lack of space.

Our homes are no longer limited to four walls and a roof. People are living in increasingly digital and communal ways. That’s why IKEA is exploring how we can design our future homes and neighbourhoods in a way that improves the quality of life while taking on some of the challenges we expect to face in urban centres. @space10_journal #IKEADDD2019 #IKEAtoday #IKEA #IkanoBostad #SPACE10 #effektarchitects @effektarchitects #cobearchitects @cobearchitects #FutureLiving

Solange Knowles’s creative agency, Saint Heron, describes itself as “a cultural hub, building an inclusive community based on artist and artisan collaborations and collective work.”

The fabric in the Musselblomma collection is made from recycled plastic that was collected by Spanish fishermen from the Mediterranean Sea. As people slowly begin to focus on ways to stop polluting the ocean, so does IKEA: You can expect a bag, two cushion covers, and a tablecloth, which will roll out first in Italy and Spain.

Meet MUSSELBLOMMA, a new collection made of plastic recovered from fishing nets in the Mediterranean. We joined the Next Wave initiative and are taking action to remove plastic from the ocean and prevent it from getting there in the first place. Planned to launch in Spain and Italy during the coming year. #IKEADDD2019 #IKEAtoday #IKEA #MUSSELBLOMMA #OceanPlastic #NextWaveInitiative

Which of these are you most excited about? We’re particularly intrigued by the reusable plastic textiles, but all of them sound amazing. Let us know in the comments below!