Home Business & Tech Happy or Not? This Finnish Duo Turned Horrible Customer Service Into A... 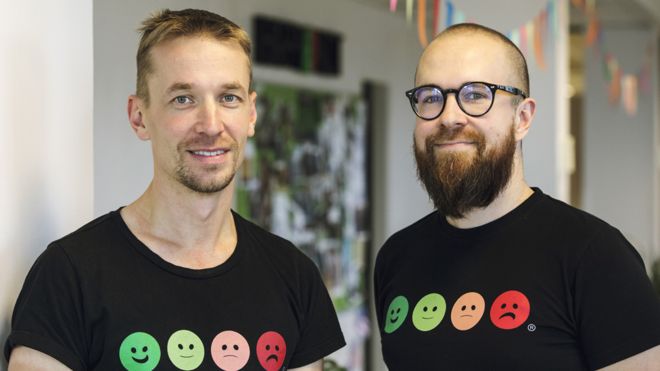 Have you ever had such a terrible customer service experience that it made your blood boil?

For Heikki Vaananen, that was one of the best things that ever happened.

As a teenager growing up in a small Finnish town, Heikki would go to his local computer shop to buy floppy disks. Unfortunately, the sales associate behind the counter was always horrible to him.

“He was always rude and dismissive,” says Heikki, “It was bullying really, he’d deliberately ignore me, not serve me. Of course, it made me very angry, but when you are young you don’t know how to deal with it. I never forgot about it though.”

Heikki recently sold his video games business, Universomo, and was looking for a new business idea.

So remembering his teenage experience at that computer store, he decided that he wanted to create a start-up that helps companies monitor and improve the level of customer service.

Together with co-founder Ville Levaniemi, they created HappyOrNot.

The company model is simple: there are physical feedback terminals, where customers are encouraged to answer questions about their experience. There could be questions about whether the staff was friendly enough, if an airport bathroom was clean enough, if a cafe’s food was good enough, and so on.

The questions would appear on a screen. The customer would then simply have to press one of four smiley faces, from very happy, to happy, a little unhappy, or very unhappy. HappyOrNot would then collate and email the data to the company.

“I thought it was a great idea,” says Ville Levaniemi “But I was sure that someone must be already been doing something similar. But I had a good search online, and amazingly they weren’t. So we started planning the concept in 2008, and in 2009 we launched the business.“

Today, HappyOrNot has 65 employees and is used by more than 4,000 organizations across 120+ countries, in locations such as airports, shops, and hospitals. Some of their biggest clients include Amsterdam AMS Airport, the San Francisco 49ers American football team, and French supermarket giant Carrefour.