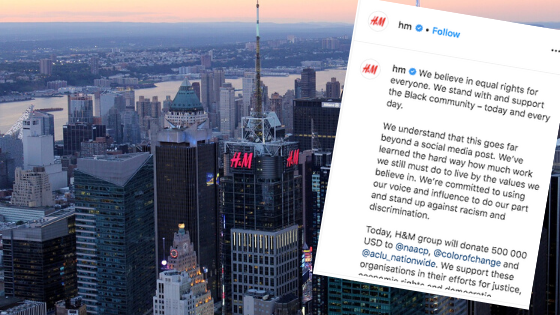 As the Black Lives Matter movement gains strength and support by protesters around the world to fight against racial injustice, H&M is doing their part to show solidarity with the community.

Helena Helmersson, CEO of H&M Group, just announced on the company’s Instagram that an astounding $500,000 USD donation to justice groups, including the NAACP, ACLU, and Color Of Change will be made. These three biggest organizations are working to fight racism, make black voices heard, and fight for human rights.

The post noted, “The recent killings of Ahmaud Arbery, Tony McDade, Breonna Taylor, George Floyd, and more members of the black community in the US leave us devastated and heartbroken. Their lives, and the lives of all black people taken by violence, mattered.”

Likewise, H&M acknowledged that activism goes “far beyond a social media post,” and added that the company stands with the black community “today and every day.”

The company outlined how they plan to play their part in the community: “We will provide our colleagues additional resources to further educate them around implicit bias. Furthermore, in the US, we will develop a stronger relationship with Historically Black Colleges and Universities and increase community events that continue to empower the black community. We will also mobilize efforts to increase voter registration.”