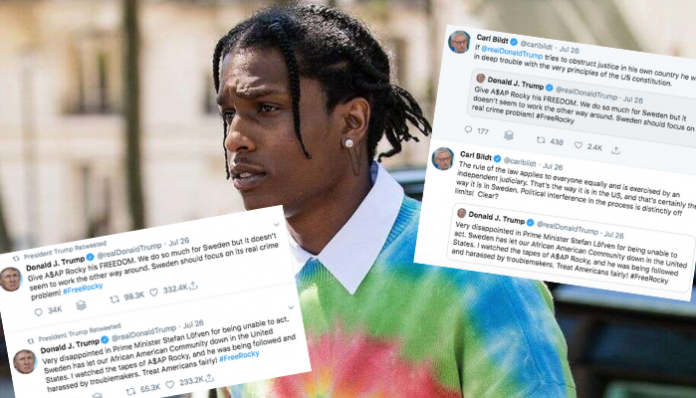 If you’ve been following our Facebook page, you’re probably in the loop that there’s some drama brewing over in Sweden. And now it’s gotten even weirder.

To recap: American rapper A$AP Rocky posted footage on Instagram of two men following him and his friends in Stockholm despite telling them repeatedly to go away. Another video clip shows a scuffle, including a man throwing an object at Rocky’s group. A$AP Rocky has been in Swedish jail since July 3rd, with many celebrities coming to his defense.

READ: The Swedish Prime Minister’s Response To Trump Getting Involved In The A$AP Rocky Case.

One of Rocky’s biggest supporters is none other than the president of the United States of America, Donald Trump. Trump has even gone so far as to call the Prime Minister of Sweden, Stefan Löfven, and talked with him personally to negotiate the release of Rocky. However, it appears that the phone exchange has had no result whatsoever.

Frustrated Donald Trump has taken to Twitter to voice his opinions on this situation, stating, ”Very disappointed in Prime Minister Stefan Löfven for being unable to act. Sweden has let our African American Community down in the United States.”

Trump continued to write, “Give A$AP Rocky his FREEDOM. We do so much for Sweden but it doesn’t seem to work the other way around.” However, Sweden isn’t playing around either. Shortly after Trump’s tweet, the Swedish government had its own take:

“The rule of the law applies to everyone equally and is exercised by an independent judiciary,” tweeted former prime minister Carl Bildt. “That’s the way it is in the US, and that’s certainly the way it is in Sweden. Political interference in the process is distinctly off-limits. Clear?” Carl Bildt also went on to publish a letter addressed to President Trump in the Washington Post. With the subject line: I was Sweden’s prime minister and No, Mr. Trump, I could not have freed A$AP Rocky either, one of Sweden’s most popular politicians writes:

“There certainly are countries around the world where the judiciary is little more than an instrument of the arbitrary powers of the ruling strongman, and where the political leadership can send people in and out of prison at their discretion. Sweden is most certainly not one of those countries.

A Swedish prime minister who tries to order a court to release a suspect or dismiss a case is first going to fail and then, with high probability, will be kicked out of office.”

Ending the letter to the president of the United States by writing:

“The three U.S. suspects will get a fair trial. No one doubts that. The outcome will be decided by the court — without any interference by any higher political authority within or outside of the country.

That’s the way it should be in a free society.“

Read Carl Bildt’s letter to the President in full here.