Home Culture A timeline: LGBTQ+ in Scandinavia and the United States 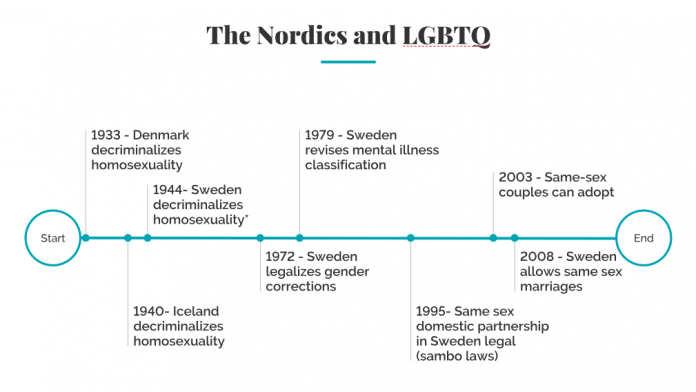 The beginning of June marks the start of Pride-month. As the world finds itself returning to a new normal after the pandemic, so are the celebrations and gatherings in support of the fight for equal rights among minorities and the LGBTQ+ community.

The focus of the pride movement is to eliminate discrimination against the LGBTQ+ community. June became the official month of Pride to commemorate the Stonewall riots in New York in 1969, and the first celebrations were held as early as the year after in Los Angeles, San Francisco, Chicago, and New York.

Denmark was the first Scandinavian country to decriminalize homosexuality, following a new penalty law passed in 1933. Iceland followed suit in 1940. Sweden decriminalized homosexuality in 1944, and instead re-classified homosexuality as a mental illness. That classification wasn’t revised until 1979, which is surprising considering that Sweden nowadays is seen as one of the frontrunners when it comes to promoting equal rights for the LGBTQ+ community. The classification of transvestism wasn’t changed until 2008. However, in 1972 Sweden became the first country to legalize gender corrections, and also began to provide free hormones to transgender persons wanting to undergo surgery. As of 2013, gender corrections do not require sterilization.

Sweden is one of the world’s most LGBTQ+ friendly countries according to the International Lesbian, Gay, Bisexual, Trans and Intersex Association, and Eurobarometer. The Swedish Federation for Lesbian, Gay, Bisexual, Transgender, and Queer Rights (in Sweden known as RFSL), is one of the oldest LGBTQ+ rights organizations. Founded in 1950, the organization today has over 6000 members, and 28 offices spread out all over Sweden. The organization was given status as an NGO by the United Nations Economic and Social Council in 2007.

RFSL was one of the primary lobbyists for legalizing gender neural marriage in Sweden. Same-sex domestic partnerships were by then already legal and had been since 1995. After 50 years of tiresome work from RFSL, the Swedish Riksdag finally passed the bill that legalized same-sex marriage in 2008, with 261 votes for legalization, 22 against, 16 abstentions and 50 absentees. Since 2003 it is also possible for same-sex couples to adopt, and for lesbian couples to receive IVF with automatic parenthood for both at childbirth.

Same-sex partnership and marriage in the United States are in comparison to Sweden a somewhat controversial topic. It continues to spark great debate and remains a stubborn political conflict. The legalization of sexual activity between same-sex couples was in the United States somewhat later in Sweden, and on a state-by-state basis. Illinois was the first state to decriminalize homosexuality in 1962, and California didn’t follow that example until 1976, along with Indiana. In 2003, the Supreme Court decided to reverse the Lawrence vs. Texas case, which invalidated the laws in the 14 states where homosexuality still was illegal. From 2004 to 2015 same-sex marriage became legal in 36 states. In 2015, the famous ruling of the Obergefell vs. Hodges case by the Supreme Court resulted in all 50 states recognizing same-sex marriage on the same terms as opposite-sex marriage.

In June 2020 of last year, former President Donald Trump finalized the rollback of an Obama-era policy meant to protect LGBTQ+ patients from discrimination when seeking medical attention. The rollback means that healthcare professionals can refuse to treat a patient based on their sexual orientation or what gender they identify with. Yesterday, President Joe Biden publicly took a stance for the LGBTQ+ community and brought back policies meant to protect people from discrimination based on their sexuality, saying: “I will not rest until full equality for LGBTQ+ Americans is finally achieved and codified into law.”

The public opinion consensus in Sweden is one of the primary differences to the United States in LGBTQ+ questions. Pride celebrations in Sweden are more important in both the private and public sphere in comparison to other countries. It is quite common for public and government officials to partake in the celebrations. For instance, the Swedish Consulate in New York has, together with the other Nordic countries, engaged in Pride activities under the hashtag #Nordics4Equality.