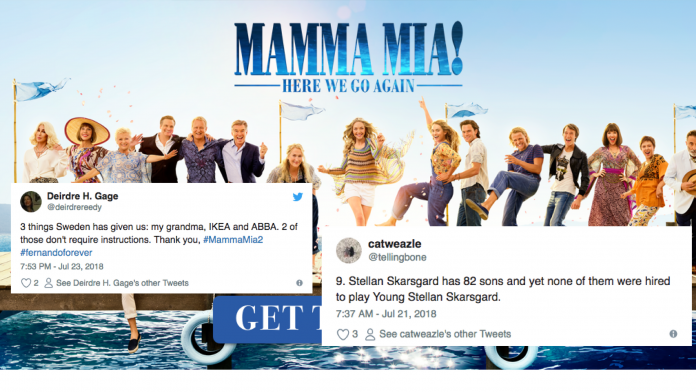 Mamma Mia is already poised to be one of this summer’s blockbuster hits, making more than $89 million worldwide (the budget was $75 million) in its first week.

Need some (Swedish) inspiration to go out and watch the movie? Say no more – here are some of our favorite reactions!

Inquiring minds would like to know what Super Trouper is slang for in Swedish because goddamn it's a catchy tune! #Abba #MammaMia2

It’s slang for being awesome. Promise.

Yes, I did cry on 3 separate occasions during #MammaMia2 and yes I will be singing nothing but ABBA for the next week pic.twitter.com/Tno1w9IVbr

Bring on the skin-tight jumpsuits.

3 things Sweden has given us: my grandma, IKEA and ABBA. 2 of those don't require instructions. Thank you, #MammaMia2 #fernandoforever

A very old, and accurate, Swedish motto: Nothing worth having comes easy.

It’s true. There are literally enough Skarsgårds to play the entire cast.

Just got out of Mamma Mia here we go again and now I need a cute Swedish boy to sweep me away and take me to Greece.

My brother is still single, in case you’re looking? He’s great at putting together IKEA furniture. That’s about it.

@NetflixNordic, what have you been smoking? Questions abound.

Look, guys, Swedish men are great and all, but just like the rest of the women in this world, Swedish women still prefer their pets.

This is actually written in the Swedish constitution.

I FELT MY SWEDISH ANCESTORS IN THE THEATER WITH ME DURING #mammamia2 THEY DIED SO I COULD HAVE THIS MOMENT ???? pic.twitter.com/U5FenJn3mV

Heaven is just a 24/7 ABBA disco party. The Vikings are loving it!

I can't stop thinking about #MammaMia2 it's nice seeing Americans so united by Swedish song and dance.

ABBA: bringing the world together since 1979.