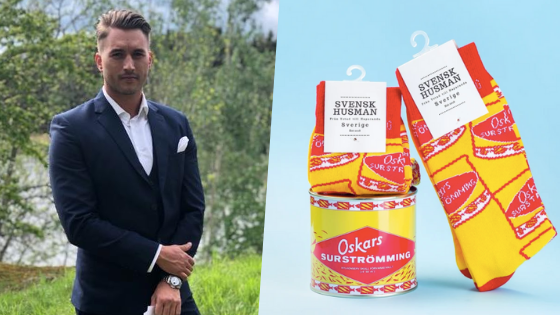 This month, we are particularly grateful and proud of Swedes in the States corporate friend, Svensk Husman.

The Swedish company, mostly known for its Swedish food-themed socks was founded by the chef turned entrepreneur, Eric Blomster, and has since its launch in 2018 grown to be popular among Swedes worldwide. Apart from putting a smile on people’s faces, and feet, Svensk Husman wants to do good in the world with their products: “we want to make a small difference in the big world”, says Eric Blomster.

And in October they are making all the difference. Throughout the month, 50% of all the profits at Svensk Husman Socks will be donated to the Swedish suicide prevention organization, Suicide Zero.

Founded in 2013, Suicide Zero is on a mission to radically reduce suicides in Sweden through education and policy changes. The organization offers seminars and lectures aimed to increase awareness and erase the stigma surrounding mental health illnesses and suicide. The organization also has a podcast called, Suicide Zero-podden, where they talk freely about the subject and answer the big questions anyone might have regarding the topic.

We can’t help but wonder if the reason Eric Blomster chose to start a company that aims at putting a smile on people’s faces has something to do with the tragic history he himself has with suicide. In an interview with Suicide Zero, Eric explains that the reason their mission lies so close to his heart is that he lost a brother to suicide. To Suicide Zero he says: “In my closest circle, I lost a brother five years ago in October.”

“We want to save lives and help people through a weak spot in life, which we really hope they will recover from. Some things you just can’t do and undo again”, he says.

If you want to support Suicide Zero’s mission and Svensk Husman during October, take a look at their funny and smile-inducing socks here.