Home Food Recipe: LusseSemla – The perfect mix between a Lussebulle and a Semla? 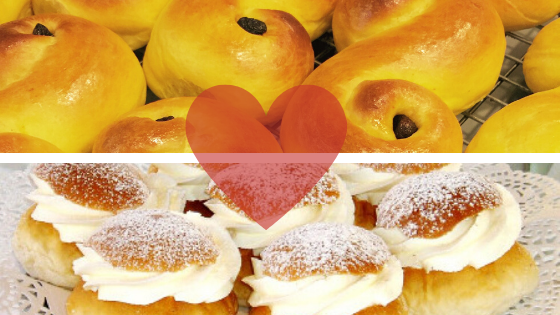 The Swedish Lussebulle has long been a popular pastry, served at Christmas and around Lucia in Sweden. Although the lussebulle is one of the Swede’s most beloved baked goods, they still can’t keep themselves from inventing new variations of the bun. Last year, the lussesemla became a new phenomenon – and it’s unsurprisingly pretty darn good.

So, we decided to share the recipe with our beloved readers. The original recipe can be found in Swedish on Aftonbladet.

2. Add the yeast to a separate bowl and pour the milk/saffron liquid blend into the bowl slowly, letting the yeast dissolve in the liquid. Let it sit for a few minutes.

3. Add the sugar, Crème Fraiche, butter, and flour to the yeast blend, saving a small amount of flour for when it is time to knead the dough and mix it all together either by machine or by hand for at least 10 minutes.

4. Let the dough proof under a kitchen cloth until it has doubled in size. About 40 minutes. Let it sit at room temperature. Depending on humidity and weather, the time may vary from location to location. Be patient, it will be worth it.

6. When your dough is done proofing, lightly flour your baking table or counter and divide the dough into two portions. Shape and roll each portion into a long roll. Divide the roll into smaller portions. How big portions and how many you make is entirely up to you but a good rule of thumb would be measuring each portion to about 2.6 Oz each. Keep in mind that baking time will be affected by the size of the bun.

7. Shape the portions into a long stick form, it should be a little smaller in diameter than a quarter. Take a tip in each hand and roll one of them clockwise, and the other one in the opposite direction until they meet in the middle. Place parchment paper on an oven tray and spray with butter/oil to make sure that the buns don’t stick. Add the saffron buns to the tray and let proof a second time, until they double in size. About 30 min. (The picture below is to help you with the shape of the buns. For this recipe, we are skipping out on the raisins!) When they are done proofing. Brush them over with the whipped eggs. 8. Place your saffron buns in the middle of the oven, and bake for about 10 minutes. Be sure to keep an eye on the buns after 8 minutes to ensure that they don’t burn or dry out. When they are done baking, take them out of the oven and let rest.

9. While you are waiting on your saffron buns to cool, start working on the filling. Mix the almond paste with a splash of cream in a bowl. You’ll want the texture to be soft but not liquid.  In a separate bowl, whip up 2.5 cups of whipped cream.

10. Cut the saffron buns in half from the side, so that you get a top and a bottom. Almost like a hamburger bread. Add the almond mix to the bottom half of the bun, and add the whipped cream from a piping bag on top of it. Add the top half of the saffron bun, and top off with the confectionary/powder sugar on top.