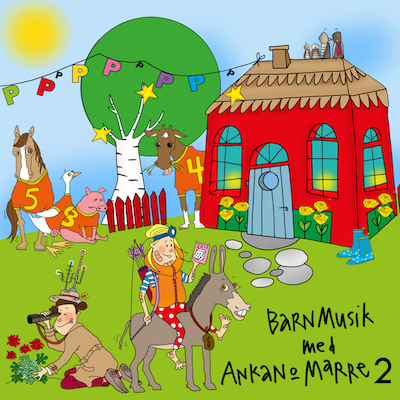 It suddenly gets a lot brighter and warmer when musical artists Annica McCrudden and Maria Isaacs enter the coffee shop in a flurry of infectious laughter and warm hugs. We’re meeting at Urth Caffé in Beverly Hills to talk about their joint passion-project Barnmusik med Ankan och Marre – a series of Swedish children’s albums that no Swedish parent living abroad will want to miss. The songs are sweet, fun, and educational with undertones of traditional Swedish folk music; the skits between the tracks are hilarious, charming, and great conversation starters for parents, teachers and kids.

The two of you seem like lifelong friends, did you know each other in Sweden?
A: No, we’re both from suburbs outside of Stockholm, but we met in the U.S.
M: Annica had already been here for many years when I moved to LA in 2012. She became my first and best friend here. She still is!

What inspired you to create children’s albums together?
M: The idea grew out of working together at Svenska Fritidsklubben, a group we created for Swedish children living on our side of LA. I live in Echo park and Annica in Beachwood Canyon, which are both a bit far from The Swedish School in Los Angeles. I did most of the singing and Annica created fun characters to entertain the kids. We’ve incorporated a great deal of that in our albums.

Why did you choose to create albums in Swedish?
M: We made them mostly for Swedish parents living abroad, like ourselves. We want to help them keep their language alive and share their culture with their children.                A: I feel like language is so important. When I first became a mom, I realized that it felt wrong to cuddle and use terms of endearment with my babies in English. I had to speak Swedish for it to truly come from my heart.

Who does what on the albums?
A: Maria is an experienced singer and musician, so she does most of the music, especially in the beginning.
M: Annica, who is a very talented actress, started out writing most of the skits. We complement each other very well that way, and have helped each other grow as artists. I was terrified of acting out the skits when we first recorded them.
A: And I was very nervous about singing, but now we both love doing all of it together.
M: I brought a lot of material from earlier collaborations, as well as from my time as a Waldorf-teacher in Sweden. We’ve included the songs that were my students’ favorites back then.
A: We have also written a total of six songs together, three on each album.

What are the pros and cons of working with a close friend?
M: The pros are how well we work together, and how fun we have while doing it. The cons might be that sometimes we are having so much fun that we just want to hang out instead of work.
A: We have a pretty good balance though, I think. When something needs to get done, we get it done. We’re both very enthusiastic about this project, which makes us efficient. 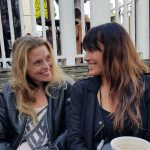 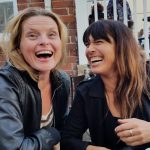 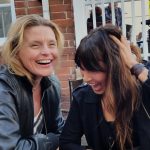 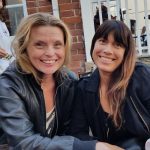 Can we see you perform anywhere?
M: We are considering performing at the Swedish schools, we’ll keep you posted.

What is the age range of your target listener?
A: I’d say from age two and up.
M: My son, who is seventeen, saw the video we are working on and said he thought it was really fun!
A: We don’t believe in an upper age limit!

I really enjoyed the melodies, even as an adult.
M: We wanted the focus to be on the melodies, and the lyrics and the productions to be pretty neutral and “time-less”. Also, my husband, who is a music producer, is making sure everything we produce can be listened to in the car without driving the adults nuts. Children’s songs can start grating on your nerves sometimes, and we want to make sure that never happens with our music.

I think a lot of parents will be very grateful for that! What’s up next for you?
A: Our focus right now is creating visual material. We are making videos for the songs that we have written together.
M: Originally, I was against the idea of videos. I was influenced by the Waldorf philosophy, where we try to be aware of and limit screen time for the younger children. I just wanted to make books to go with the music.

A: Books are great, but it felt like we’d be fighting our own time; there is so much visual material out there that children love watching.
M: We ended up making a video for one of the songs, “Min Lilla Igelkott”, and when I saw how brilliant Annica was, how genius the whole thing was really, I completely changed my mind about videos. Now I’m very excited about working on the visual material, it is our number one priority.

A: We just filmed a video yesterday, it was so much fun! We are also working on the next album in the series: Ankan och Marre. Vol.3.

We can’t wait for that to come out! In the meantime, you can check out Ankan och Marre’s new video below, and buy/download Barnmusik med Ankan och Marre Vol. 1&2 on all major music streaming platforms, such as Amazon, iTunes, and Spotify.