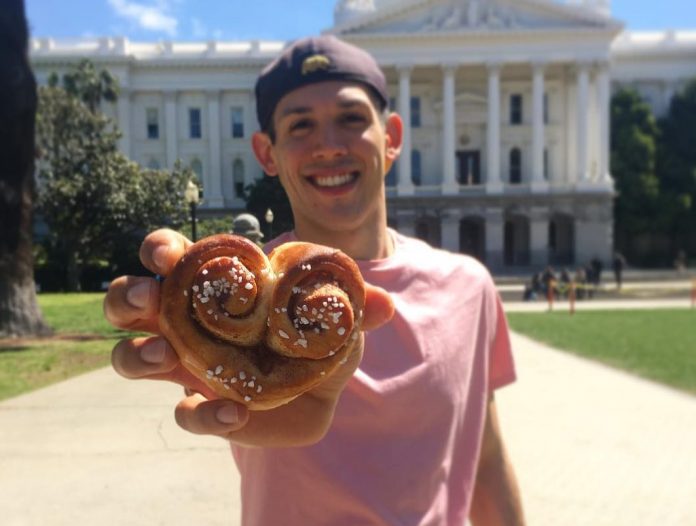 Joe Luna from Boy’s Bakery is the newest addition to Swedes in the States upcoming Youtube series “Cooking with Swedes in the States”. With a passion for baking and a mission to make America feel a little bit more like home to his Swedish wife, Joe started Boy’s Bakery, a pop-up bakery in Sacramento that creates Swedish fika classics with a twist.

Swedes in the States caught up with Joe to hear more about his story, the birth of Boy’s Bakery and what you can expect to see from him on our platform.

Tell us about Boy’s Bakery. How and when did you decide to start baking Swedish pastries?

Boy’s Bakery is really a project of love for my wife Johanna and my passion for baking.
Johanna and I met in high school at a Sacramento cafe where I worked as a baker and she was a barista. She had recently moved to California from Sweden and was very homesick, so I thought I would begin baking Swedish pastries to help her. I promised her that I would carve a small space in Sacramento that would make her feel at home.

Throughout college, I continued working in the culinary industry and also learned a lot about Swedish baking when I lived in Stockholm for nearly three years. When Johanna and I returned to California in 2016, I accepted an ”office job” and soon after realized I needed to get back into baking, so I created Boy’s Bakery. I’ve kept my promise to Johanna and I continue to baked kardemummabullar, chokladbollar, kärleksmums, and other Swedish treats in hopes of making Sacramento a little bit more Swedish.

Some of your pastries have a fun twist to the traditional Swedish pastries. How do you come up with these creative twists?

The concept of Boy’s Bakery is very Swedish. My recipes follow typical Swedish baking techniques and many of the flavors I began with can be found in any Swedish bakery. I chose to incorporate flavors not typically found in Sweden as a way to share a little bit about myself – ”The American”. My mother is Filipino and my father is Mexican so there are all sorts of flavor combinations that I am excited to work into the Swedish bulle bun!

Has your background always been in baking?

I graduated from UC Berkeley as an Anthropology major, but before that, I attended the Culinary Institute of American (C.I.A.) in Napa Valley. Even before the C.I.A., I worked at a bakery in Sacramento. Baking certainly came before college and anthropology, and it remains at the forefront of my longterm goals and passion.

What’s your connection to Scandinavia?

I was first introduced to Swedish culture when Johanna and I started dating when we were sixteen. My first event with her family was celebrating the Swedish kräftskiva in her mother’s backyard. My father is from a small delta town in California, known for crayfish so that part of kräftskiva wasn’t too different. However, all of the songs I ”sang” (mumbled) at the table while wearing a bib and a children’s party hat, now that was a new experience!

I took my first trip to Sweden at nineteen and have been back nearly every year since. I lived in Stockholm for three years where I attended grad school and learned the language. I think it’s safe to say that my home in California is very much a ”Swedish” home!

Where can people find your pastries?

I currently sell Boy’s Bakery bullar at cafes around Sacramento. I have a rotating schedule of pop-ups through the city and try to offer different varieties at each pop-up. Beginning this fall I will have a more permanent location where people can pick up bullar from Boy’s Bakery. 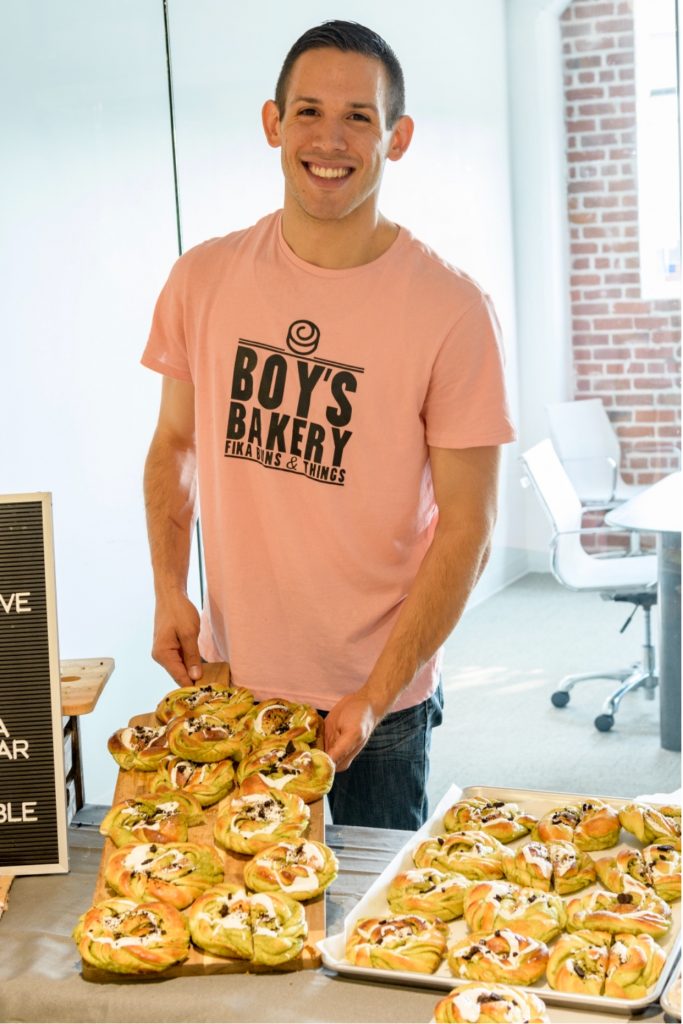 What type of recipes can we expect to see from you on the Swedes in the States platform?

I have tons of recipes that I have developed over the years since I started baking Swedish pastries for Johanna! Some of my favorites are my Christmas bullar with saffron and pepparkakor spices. I also have a ”semla-bulle” which is Johanna’s absolute favorite!

There are other traditional recipes for things like kärleksmums, kringlor, and rågbröd that I am very excited to share on the Swedes in the States cooking show!