Home History Borgvattnet: The most haunted house in Sweden 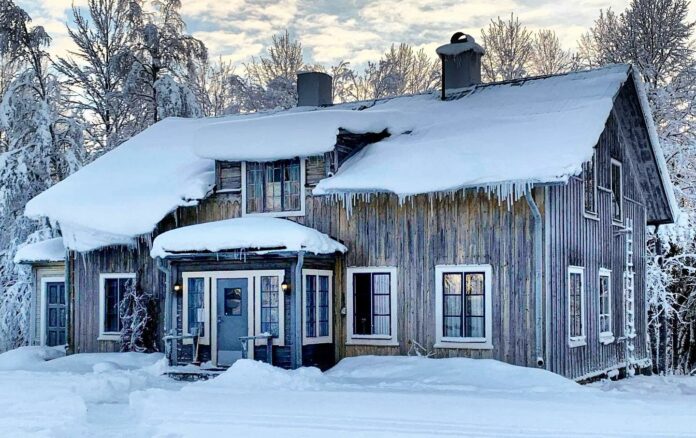 In the deep forests of Jämtland stands a lonely vicarage. At first glance, this old country house might not look like much to the world but this house has a dark past that pales in comparison to many other places in Sweden.

The fragile wooden walls and creaking floors have, for over 100 years, been the scene of tragic events and paranormal activity. In fact, Borgvattnet vicarage is considered to be the most haunted place in Sweden and it frequently makes its way onto lists of some of the most haunted places in the world.

More than 250 years ago, the first inhabitants of what would eventually come to be the small town of Borgvattnet moved to the area. As with most new towns at the time, a church was one of the first structures to be built. For any priest who decided to take a job at a church, it was customary to get a small farm or piece of land to live on and cultivate, which is how Borgvattnet’s vicarage was built.

In the year 1876, the first priest of Borgvattnet moved into the vicarage. A total of 15 priests would come to live here before the last one had finally had enough of the ghostly activities and decided to move out, with no other priest willing to take over. What came to be the final straw is still one of the most famous ghost stories from the house.

Although the first reports of hauntings at the vicarage were made by a priest in 1927, it wasn’t until the last priest of Borgvattnet, Erik Lindgren, moved into the vicarage in 1945, that it became publicly known that the grounds were haunted.

During a meeting held by Jämtland County Agricultural Society in December of 1947, a journalist from a local newspaper had caught on to the rumors of the haunted vicarage in town and bluntly asked Erik Lindgren about his experiences. It was safe to say that not only had Erik documented his experiences, but he was also willing to go public with them.

According to Lindgren, one of the most haunting experiences he had while living there was when was suddenly thrown off his rocking chair one night by an unknown force and he ended up on the floor. According to Lindgren’s notes, he was never able to sit in the chair for too long before being thrown off.

Soon the stories of Borgvattet would become a national sensation. After all the publicity, previous priests and guests who had spent the night in the house started coming forward with their own stories. Since ghosts or paranormal activity are not favorably looked upon in the Christian religion, there would have been plenty of reason for previous priests to not want to open up about their paranormal experiences.

One priest would recall a time when saw a gray-clad lady appear in a corner of the room he was sitting in. She would slowly walk towards him only to suddenly change direction and walk into another room. As he would get up to follow her, he realized the room she had walked into was empty.

A visitor who spent the night in a room now known as ‘the weeping ladies’ room’ would recall waking up in the middle of the night, to the feeling of being watched. As she sits up, she sees three figures sitting on a sofa and staring right back at her. According to the guest, she would pinch her arm to make sure that she was awake. And when nothing seemed to help she would turn to the alarm clock and set it off. Confident that she was awake and not dreaming, she claimed to be certain that the women were sitting across from her all night, watching her.

No one really knows how these hauntings began, but the most accepted story is that one of the first priests to live at Borgvattnet had a sexual relationship with a young local girl. It is not clear whether this was a consensual relationship or if she was raped. When learning that the 19-year-old girl was pregnant, the priest would lock her in an enclosure in the backyard. It was also in the same backyard that the girl would bury her child right after killing it. It’s not clear whether the young girl made it out alive of the enclosure, or if she met the same fate as her child.

There are a few more haunting stories about Borgvattnet to be found online, some more disturbing than others. Regardless of whether you believe in ghosts or not, one thing is for sure: it takes as much courage to spend the night in Sweden’s most haunted location today, as it did a hundred years ago.

This article was originally published on May 10, 2021

The coldest day ever recorded in Swedish history