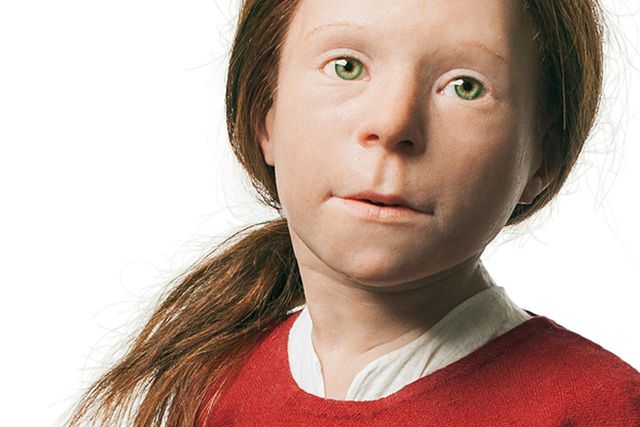 Birkaflickan, Eng: The Birka girl, would run across the fields of Birka, regarded as Sweden’s first city located on Björkö, an island on the Lake Mälaren, over a thousand years ago. In the alleys of this ancient city, she would play with other children, see ships and merchants from near and far arrive at Birka to trade exotic and new items that she had never seen before.

In the 900’s, at the age of six or seven years old, her life was cut short. The cause of her death was most likely a disease that could have easily been treated with modern-day’s medicine. At the time, wounds and infections could be life-threatening due to the lack of hygiene and medicine. Parents were to expect the death of at least one, or several of their children, with the death-rate among infants being high, there was a grim chance that only about 50 percent of children would make it past their 10th birthday.

In well-preserved Viking era grave fields, the children’s graves lie in large swarms around the adults. The city was surrounded on all sides by large burial grounds that lead right into the houses. To get to the fortress or out of the city, you walked on paths between the burial mounds. The dead played a major role in society. One could enumerate several generations of ancestors and know where they were buried. Deceased ancestors legitimized ownership, rights, and social status.

Birkaflickan was buried 3ft below ground on the northern side of the Birka fortress, close to the wall in her family’s burial ground. The family buried her in a coffin made out of wood and placed gifts in the coffin beside her. Among the gifts in the grave a gilded round buckle, twenty-one pearls, a knife, and a container made of bone with sewing needles in it was found. Gifts that indicated that Birkaflickan belonged to a wealthy family.

It was during Hjalmar Stolpe’s “investigations” at Birka in 1876 that Birkaflickan was found in her grave. She was transported by wagon and boat to the Swedish History Museum in central Stockholm, where she still lies, exactly the way she was buried.

In 2011, Birkaflickan’s appearance was reconstructed by the sculptor and archaeologist, Oscar Nilsson. The reconstruction is also exhibited at the museum and she has been given the new name, Disa – a fairly common name during that time.

A few years ago, researchers would claim that Birkaflickan most likely not born in the Mälaren region as was previously thought. Because of the gifts in her grave, it was more likely that the girl originated from northern Germany or southern Denmark. However, recent research from 2020 which via strontium analyzes her teeth, supported the claim that the girl was indeed born in the Birka area.