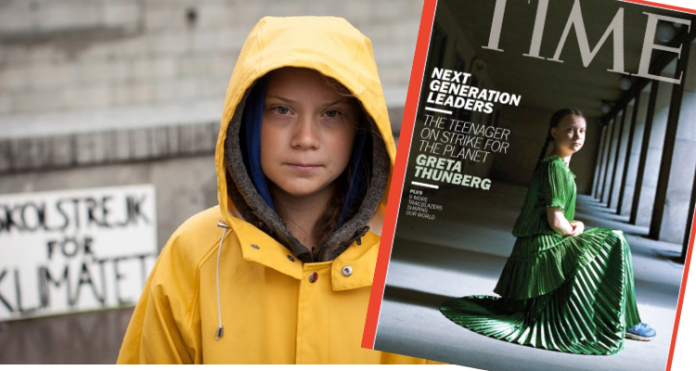 There are few who have missed the rise of Swedish teenage environmentalist, Greta Thunberg. From sitting outside the Swedish parliament in Stockholm, striking for the climate on her own, to inspiring millions of people to consider their own footprint on the planet, Greta has made an enormous impact in such a small amount of time.

READ: The Quotes By Greta Thunberg That Inspired Thousands To School Strike For The Climate

Next step? Gracing the cover of Time Magazine in their Next Generation Leader campaign. Unsurprisingly, perhaps, after inspiring hundreds of thousands of children to stand up to politicians around the globe, asking them to take climate change seriously, for their sake.

“We are children, saying why should we care about our future when no one else is doing that? When children say something like that, I think adults feel very bad,” Greta Thunberg says, according to Time Magazine

A recent UN report claimed that human society was under urgent threat as more and more of the Earth’s natural life goes extinct. Greta’s goal is to convince governments to reduce emissions in par with the Paris agreement hence limiting the rise of global temperature to 1.5°C above pre-industrial levels.

Greta’s refreshing frankness and sense of urgency has not only brought on fame and admiration from politicians, royals and even the Pope. She has also been the target of bullying and threats from climate-change deniers, some criticizing her serious appearance and monotone voice, which are common characteristics with people on the autism spectrum.

But that doesn’t bother Greta. To Time Magazine she says:

“It’s quite hilarious when the only thing people can do is mock you, or talk about your appearance or personality, as it means they have no argument, or nothing else to say,”

“I’m not going to let that stop me, because I know this is so much more important.”

You can read Time Magazines article about Greta here.