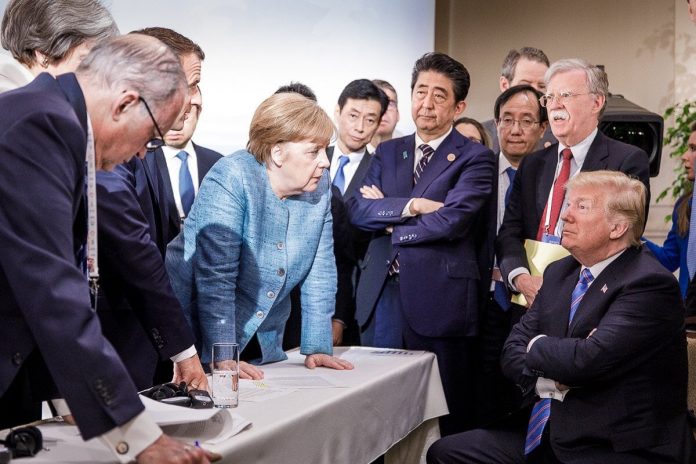 ”Looking at the latest decisions of President Trump, someone could think that, with friends like that who needs enemies?” said the President of the European Council Donald Tusk at the EU-Balkan summit in May, when the U.S. president announced that the US would be withdrawing from the nuclear deal with Iran. Still facing US trade tariffs and dealing with US sanctions against Iran, the relations between the US and the European Union when entering the G7 summit in Quebec last week were strained, to say the least.

The G7 (formally G8 until 2014 when Russia was excluded for its annexation of Crimea) meet every year, and this year the agenda consisted of discussions on gender equality and environmental challenges among other things. For instance, the Norwegian Prime Minister, Erna Solberg, attended the meeting to present an environmental sea project. However, the topic on everyone’s minds was, of course, the infected trade relations between the US, its allies and, China.

After President Trump unilaterally imposed tariffs of 10% and 25% on aluminum and steel in March, NAFTA members Canada and Mexico and the European Union were temporarily exempted from the rule until the 31 of May. The EU Commissioner for Trade, Cecilia Malmström, has said all along that the trade tariffs are a breach of WTO regulations and that the EU is not going to negotiate under threat.

In an interview with The Guardian, she said that ”the US is playing a dangerous game /…/” and that the tariffs are even more unfair since they affect the US’ closest allies, i.e. countries in NATO and the EU. The EU has opened a case against the US in the WTO and issued a list of goods to be targeted by retaliatory tariffs. China responded with tariffs on US products in April, followed by Mexico. Among other things, the products on the EU’s list of tariffed goods include Harley Davidson motorbikes from Wisconsin and bourbon from Kentucky, supposedly targeting Republican Speaker of the House, Paul Ryan, and Senate Majority Leader Mitch McConnell.

The G7 talks proved fruitless. Indeed, the divide between the participating countries has never before been so evident. President Trump and his National Security Advisor John Bolton lashed out at Canadian Prime Minister, Justin Trudeau after Trudeau blamed the US president for the frosty relations. “I highlighted directly to the president that Canadians did not take it lightly that the United States has moved forward with significant tariffs,” said Trudeau. “Canadians, we’re polite, we’re reasonable, but we will also not be pushed around”. Both the French President, Emmanuel Macron and German Chancellor, Angela Merkel were clearly worried after the meeting, as the EU remains feeble with conflicts of its own.

Malmström has been particularly clear that it is of great importance to the European Union to protect European workers hit by the tariffs, and Sweden will likely be a victim of the cold relations since steel and cars constitute a significant part of Sweden’s exports.

According to the Swedish Minister of Trade, Ann Linde, approximately half of Sweden’s GDP is made up of exported goods, and it is obvious that the 1,4 million Swedish jobs depending on Swedish exports will be affected by the tariffs, regardless of industry. Sweden will also be affected by the fact that the German auto, steel and aluminum industries will take a hit since the country is one of Sweden’s most important trading partners. The World Bank has warned that trade tensions might end in a crisis equal in proportion to that of 2008, since economic protectionism might upset financial markets, ultimately leading to higher interest rates and slowed growth as well as economic stagnation resulting from the decreased economic activity.